It has been a long time since I shared updates on the game, but I finally have significant progress so here we go!

For a long time I wanted to redo all the assets of the game (menus, save menu, dialogue box etc...) to finally express the visual identity I truly wanted and it is finally done! I hope you will like the new "art deco" aesthetic and the new menus.

Here are a few pics to showcase the new assets: 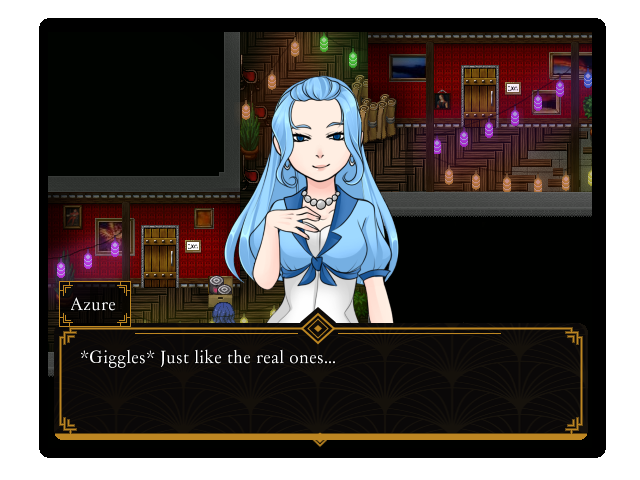 In addition, the new release features:

I wonder where this last screenshot comes from...? So yeah, you guessed it, that's not all! I am very glad to announce that Chapter One is now fully complete and has gone through beta testing as well! I spent a lot of time doing all the maps for the new areas (no, don't expect a lot, I'm just really slow... :p) as well as the new assets, and I tried my best to implement beta tester's feedback on the first chapter to improve your final experience of the game!

I guess there is a lot of things I could put on the new features and devlog but unfortunately...

In the last development blog, I asked you if you would like to see this game release episodically, and despite your general enthusiasm for this perspective, I decided to go with just one final release when the game is completely done. The main reasons why I choose to give up on the idea are the following:

For all those reasons, I think it is best for me to release the game once it is fully finished. However, as I wanted to show you the visual improvements I made during the development of chapter 1, I decided to share this new version of the demo with you. :) For those of you that will replay/discover the game with this build, please let me know if you encounter any bug or error! I will do my very best to fix them as soon as possible.

I think this is all for today, for those of you that are disappointed by the fact that they won't be able to play chapter one right know: I am still looking for a native English speaker willing to help me proofread the game (and thus chapter one as well). So if you are good with language and like the game, let me know! :)

I'll come back later with news on the development of chapter two, thank you for reading this note until the end and for following Specimen Girl's development. :)

Four rooms, four girls, five locked doors, one question: how to get out of here? (Demo)